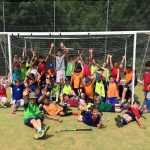 Sessions for girls and boys between 7 – 16 years old start again from Sunday 10th September at Ashmole Academy from 10AM to 11.30AM. This is a great introduction to hockey for those who might have played at school or for those who’ve never held a hockey stick before. 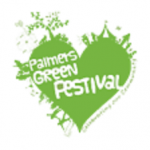 Come an join us at the Southgate Adelaide Hockey Club stall at the Palmers Green Festival in Broomfield Park N13 on Sunday 3rd September from 12PM to 5PM. You can have a go in our hockey area and find out all about playing for our club and North London Hockey youth hockey training. 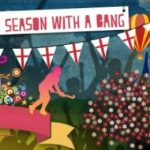 As part of Hockeyfest 2017 come along to our 2017 open sessions on Saturday 2nd September 2017 and Saturday 9th September 2017 from 12PM to 2PM at Ashmole Academy astroturf pitch, Cecil Road, Southgate, N14 5RJ.

Everyone welcome regardless of ability. if you do not have a stick there will be one you can borrow. We will be playing a series of short matches for different levels of player so everyone can enjoy a game.

Do call one of the club contacts if you want more information, or just turn up on the day. 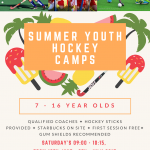 Sessions for girls and boys between 7 – 16 years old are running for 5 weeks from Saturday 10th June at Ashmole Academy from 9AM to 10.15AM.. This is a great introduction to hockey for those who might have played at school or for those who’ve never held a hockey stick before.

Did you used to play hockey at school, university or at a club? Or have you always fancied giving hockey a go?

Back to Hockey at Ashmole Academy is perfect for you!

Southgate Adelaide Hockey Club are taking part in the Back to Hockey initiative from England Hockey again this year and will be running a number of informal sessions for players or newcomers of all ability.

We’re running “Back to Hockey” sessions for 8 weeks from the 4th July and they are FREE to attend! The sessions are every Tuesday from 8pm at Ashmole Academy School, which is a 5-10 minutes walk from Southgate Tube station.

Back to Hockey sessions are fun, sociable and informal and aimed at people who either haven’t played hockey for a number of years or who are looking to play for the first time. Don’t worry if you’re nervous or don’t remember any rules, our Back to Hockey coaches will gentle guide you through this series of fun and friendly sessions. We promise it’s nothing like the schools days of muddy pitches and standing around waiting for a touch of the ball! According the scientists, a session of hockey burns 450 calories and is a great way to improve fitness. As well as the fitness aspects, playing hockey with us is a great way to make local friends, we’re a sociable bunch!

If you enjoy the Back to Hockey sessions, we’d love for you to join us for the 2017/2018 season which starts in September.

See our Back to Hockey page for further details.

The club Annual General Meeting will be held in the Adelaide bar at the Walker Ground on Thursday 8th June at 20:00.

The agenda can be found using this link. All are welcome to attend.

We had an unfamiliar line-up due do absences and injuries so the game started rather scrappily.  The home side had a couple of dangerous players but overall we had the edge without managing to create much in the opening minutes until suddenly Rashmi got the ball on the right wing and cracked over a thunderous cross from the edge of the pitch to give Mike an easy sweep home.
Berl and John Bennett were kept busy in defense by their youthful wingers but did enough to blunt all but the occasional attack. Adrian in the centre played a disciplined game, frustrating the opposition.  Nonetheless Sam, our impromptu keeper, had plenty to do.  Given that he was carrying an injury and could not run he played magnificently.
Matt and Mark played well in  midfield managing several triangular moves between each other and the forwards.  Brian was busy on the right wing and created the second goal with a typical long run down the right, slipping the ball through to Mark who beat the keeper to the ball on the edge of the circle and scored.
Then Mike was taken out by a dangerous tackle that left him bleeding uncontrollably from the hand and had to leave the field.
The second half was a big ask with only ten men.  Everyone fought hard and were remarkably successful but legs tires and three goals went in to put Berkamsted in a winning position.  But Rashmi had not read the script and in the dying minutes beat the defence and keeper all by himself to snatch a well-merited draw.

We started with just ten on the pitch and lost an early goal but we were soon up to strength. Our opponents had some very strong and fast players so kept our defense under pressure but we were able to counter strongly on occasion.

Barry at centre half played his pivotal role well, both tackling and moving the ball forward . Behind him Andy Clemson played brilliantly at centre back where his defensive hits were essential to get the ball upfield and relieve the pressure. Andy Sterlini played his usual superb game in goal, but some opposition attacks were so good that even his heroics could not prevent us being four down at the break.

After half time we changed the balance of the game. The defense tightened up, both Berl and John Bennett did a superp job neutralising fast wingers and feeding the ball forward to the midfield. George moved to his more familiar left wing where he tested the defense and tackled back relentlessly. But it was Roger who started to create the best openings from left half, two excellent diagonal through balls showed there were gaps in the defense. Then Mike made a run from our own half, burst through two defenders into space finally shooting just wide of the left post from the edge of the circle.

Jan Willem moved to right half where he played very constructively and crowned a good performance with a powerful and penetrating diagonal cross that could so easily have been deflected into the net. John Dunne worked tirelessly until he really did, inevitably, get tired, but he never ran out of energy.

We created several promising attacks but could not quite find the net. We conceded two more but we redressed the balance a bit at the end after a move that started from Andy at the back. He pilfered the ball from the home attacker with a great tackle and slipped it on to Roger who battered his way through the midfield into space, somehow dredging up the energy to move forward with the ball and slip it through to Jan-Willem on the right wing who crossed it for Rashmi to scoop the ball over the prone keeper in the dying seconds.

We all played well. There were lots of good attacking situations. We frequently penetrated the opponents circle. We had loads of shots on target. Ten short corners. We hit the post at least twice. There were two shots cleared off the line by defenders and one by on of our attackers. Several great saves by their keeper who played suberbly. There were hald a dozen chances in front of goal where all that was needed was to get the stick in the right position to touch the ball home.. Yet we did not score one goal. I must say I am rather lost for words.

Our defence again played a solid game. Keeper Vas Eliades was called into action a few times and made a great save in the first half but in general the opposition attacks were snuffed out before they became dangerous Billy Billimoria had a particularly good game making several good tackles in difficult positions. Wayne Burke again played strongly at centre back tackling and distributing the ball well.
The midfield started well and began moves generating numerous attacking situations. Brian Beisty again creating lots from right half, Ben Williams dominating the centre and Ashley D’Mello overlapping on the left. Andy Sterlini was always available up front, we were well on top and just needed to convert chances in to goals. Christian Simon was unlucky not to score after his shot looked destined for the back of the net. Mike Lord hit the post and prompted a goalmouth scramble from the rebound.

Yet nothing seemed to work and as the game progressed into the second half a bit of frustration crept in. We were well on top yet we changed tack to dribble more instead of passing more. We looked to hold the ball instead of moving it on quickly. Caught in possession or running into a solid wall of defenders we were more easily contained. We still created chances but they were not as many and not as good as they should have been.

Then we conceded a goal at our end, which the opposition deserved for their efforts. We finished very strongly but again were denied by the post and the final whistle.

So we lost 1-0 although we could have done much better we did more than enough to win by a fair margin. Hopefully lady luck will be back on our side next week. We have two pre-season open days for anyone new to the sport or new to the club to join in some real game play.

During the season we hold FREE training sessions every Tuesday evening from 8.30PM to 9.30PM at Ashmole Academy, these will restart on 14th September. Members and non-members alike are welcome.

It offers youth hockey training for boys and girls aged from 7 to 16 years.

Events will be running at Ashmole Academy on Sundays from 10am-11.30am from September. For further information follow us on our Facebook page NorthLondonHockey

Year 9 or below? You could represent your borough

North London Hockey will be running coaching and squad selection sessions for children in Year 9 or below at Ashmole Academy again in 2021.

For further information visit NorthLondonHockey and you can register your interest using this link.

If you wish to pay by online transfer, please contact the Treasurer for details.

Kit is available to order from our new supplier Zeon. For more info go to our Kit page.

Forgotten the rules or a complete beginner?

Find out more in a series of 2 minute videos on our How to Hockey page.